Nearly 20 years ago, I found myself in the hospital emergency room experiencing excruciating back pain and unable to breathe without assistance. I can still remember a doctor talking about the seriousness of the situation. Hours later, my family and I learned that I was dealing with pulmonary embolisms (blood clots in the lungs). The doctors discovered I had a blood disorder and it did not mix well with a prescription medication.

Breathing is the major function of the respiratory system.

Broken down into the upper and lower respiratory systems, the upper portion includes the nose, pharynx and their associated structures. The lower region refers to the larynx, trachea, bronchi and lungs. Oxygen (O2) gets transferred from inhaled air to blood and then carbon dioxide (CO2) is transferred from the blood to exhaled air. This system also:

Many muscles help us breathe by causing the expansion and contraction of the thoracic (chest) cavity. Inhalation is accomplished with the help of the diaphragm, the sternocleidomastoids and scalenes which are found in the neck, and the external intercostal muscles which reside in between the ribs. The muscles that assist in exhalation include the internal intercostals (which are also situated in between each of the ribs) and the abdominal muscles: the external oblique, rectus abdominis, transverse abdominis and the internal oblique. 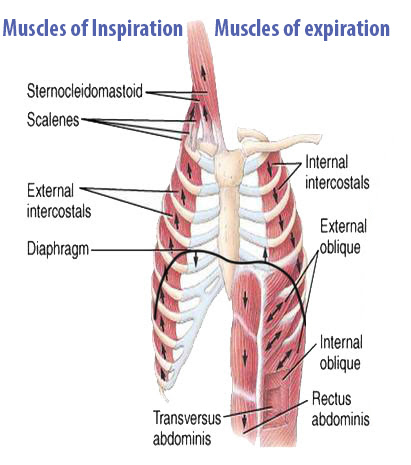 My case was quite unique. Of course, many other conditions can impact a person’s ability to breathe easily. The involved musculature begins to show signs of weakening as early as in the mid-20s to early 40s. Asthma, bronchitis/sinusitis or chronic obstructive pulmonary disease (commonly referred to COPD) also negatively affect breathing – as does trauma, scarring, neuromuscular or autoimmune disorders.

Massage therapy lengthens and relaxes the muscles associated with breathing. It also improves posture, which is vital to the proper functioning of the entire respiratory system.

If you’d like to feel better and relax more easily, call today to schedule your next session!

Libby Winterhalter, a licensed massage therapist (LMT), has been in private practice since July 2004. She graduated from SHI Integrative Medical Massage School, then located in Lebanon, Ohio. Prior to that, she received a Bachelor of Art’s degree in Communications along with a minor in Religious Studies from the College of Mount St. Joseph in 2001. Libby has also worked both in the corporate world and she served as a Journalist for the United States Navy for 22 years, from which she is now retired. She is an active member of the American Bodyworkers and Massage Professionals Association (ABMP).